The King of Salsa Rap 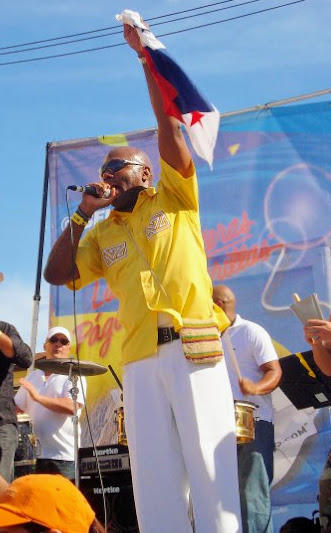 Born in the Republic of Panama' and raised in the Calidonia and Rio Abajo neighborhood, this black Latino international star is a singer, composer, musician and movie actor, he is characterized by his energy, magnetism, power and there's no doubt that he would take control of any stage and will make it glow with a tropical salsa, calypso and reggae flavor.

As a musician, Willie Panama' was an exclusive artist signed with Gon Bops, Tycoon and Sabian having many times been invited by Danilo Perez the founder of the PJF to participate as a Master Instructor in the Panama' Jazz Festival.

He also has made an incursion in the cinema business as an actor in the role of a bodyguard in the Malcom X film, directed by the famous Spike Lee as the bodyguard next to the Oscar Winner African - American actor Denzel Washington, and also in the movie Any Given Sunday directed by the great Oliver Stone, in the double character of the Oscar Winner African-American actor, Jamie Foxx, other films are Engaging, Chat and La vida del Padre Alberto.

He has toured extensively around the world: Europe, Canada, Mexico, the Caribbean, and South America. One of his many achievements was to participate in the Mint Festival House at the 2008 Cannes International Film Festival in France.

Willie sang an Amazing and Outstanding rendition of the Panamanian Anthem getting him a standing ovation.

Willie Panamá has been recognized and awarded by numerous Consuls and Ambassadors of Panama' around the world, by Mayors in Miami Florida, and by Florida Senator Rick Scott who recognized him twice with the Governor's Veterans Service Award for his honorable and distinguish service to the US Armed Forces, the arts , music and to the great State of Florida.

In 2016 he was recognized by the New Jersey State Legislature and was given a citation by the President of the Borough of Brooklyn City of New York.

In March of 2020 he was one of 3 VIP guest musical artists to perform for icon music producer Emilio' Estefan Jr. Birthday Bash Party in Miami Florida.